Understanding The World We Live In

The Centre on Critical Thinking is a virtual centre for advanced studies created by Dr. James Skelly, who has had an extensive career in Peace Research and Peace Studies as a professor and senior administrator at the University of California's Institute on Global Conflict and Cooperation, New York University's Center for War, Peace and the News Media, the European Peace University in Austria, the University of Ulster in Northern Ireland, and more recently as a Senior Fellow and Director of the Baker Institute for Peace and Conflict Studies at Juniata College in the United States. The Centre began out of a recognition that many institutions of higher education are failing pedagogically to aid students in becoming sovereign thinkers able to rigorously engage the questions our societies face in the 21st century. Many institutions of higher education increasingly present 'knowledge' as bits and pieces of disconnected information - commodified in a manner that mirrors the larger tendencies in consumer oriented societies. And while many universities are reducing their emphasis on the qualitative aspects of liberal arts and the 'hard questions' of humanist thought, students and scholars alike face new landscapes in which traditional approaches to deriving meaning are of less and less help.

“The present educational crisis is first and foremost a crisis of inherited institutions and inherited philosophies. Meant for a different kind of reality, they find it increasingly difficult to absorb, accommodate and hold the changes without a thorough revision of the conceptual frames they deploy, and such a revision, as we know from Thomas Kuhn, is the most overpowering and deadly of all the challenges thought may encounter.”

There is no question that the 21st century world has rapidly evolved into one structurally different from its predecessor. There is no clean break between an 'old' world or a 'new'; 'modern' or 'postmodern'; 'international' or 'global'; 'virtual' or 'real'; but the tangle of effects that novel technologies, logics, and global spaces have wrought in the post Cold War period require the application of careful and innovative intellectual synthesis. In the tradition of Harold Innis, Marshal McLuhan, Neil Postman and many others, The Centre approaches education through the understanding that the technological innovations with the broadest social impacts - and which often go uncritically taught - tend to be intellectual technologies. We have arrived in the "information age," only to fail as educators to ask what it means for our institutions, our curriculums, our research, and our students to live and learn in it.

A study conducted a few years back at the University of Southern California indicated that using digital and analog devices we are now able to store 295 exabytes (put 20 zeros after the 295) of information; that's 315 times greater than the number of grains of sand in the world. Even seven or eight years ago, according to Science Daily (2011), humans were successfully sending 1.9 zettabytes of information through broadcast technology such as televisions and GPS units. That's equivalent to every person in the world reading 174 newspapers every day. The quantity of personal data possesed by the NSA would cover Europe in its entirety if stored in physical files like that of East Germany's Stasi.1 And in the words of Neil Postman, "Technological change is not additive. It is ecological."2 Not only are we all exposed to vast new quantities "information," we are living in a new information ecology which has rearranged the balances and relationships between information, knowledge, thought, analysis, production, and power.

The center was born out of an experimental attempt to use critical pedagogy to engage with these structural changes, in full acknowledgement that deep and critical thought are as important now as they ever have been. The informational bent of our digital, global worlds encourages speed, brevity, superficiality, constant connectivity, and new forms of 'literacy.' These turns may offer social movements, political institutions, and intellectual communities new opportunities and resources; but in the same moment they privilege their own dimensions and threaten to foreclose intellectual possibilities that originate in other forms of thought and discovery. The Centre builds a collaborative, dialogic educational experience in which participants can locate some distance from the habits of the digital environment, position themselves and their intellectual pursuits within a historical context, and together cultivate the ability to "think" - that faculty which Hannah Arendt observed Adolf Eichmann so 'curiously unable' to do.3

In his 2011 review of James Gleick's The Information, Freeman Dyson argued that it is the immense size of databases that gives us “a feeling of meaninglessness", but that it is “our task as humans to bring meaning back into this wasteland.”4 The Centre acknowledges that this is not just an esoteric task, but takes also from Arendt that as students face into a highly militarized, surveilled, unequal, unsustainable, and unstable set of conditions in the present era, the methods and forms through which we come to know and act in the world arrive as urgent and immediate matters.

For more about the sensibilities of The Centre on Critical Thinking see our pages on our rationale on the seminar pedagogy. 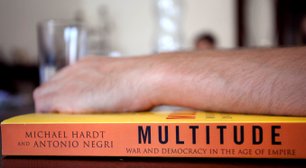 "The task of the Centre’s programming is to provide students with the foundation upon which they can begin to create narratives about the human project...

...In the face of an academic tilt towards quantitative association and scientism, The Centre seeks to revive meaning as a central tenet of scholarship and the student's relationship with knowledge. Through co-learning and co-research, we hope to develop together, in the words of Jurgen Habermas, the 'common ethical-political dimension that would be necessary for a corresponding global community.'"